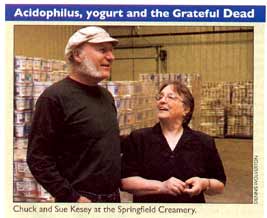 Chuck "Joe'' Kesey,'60, gives credit to Paul Elliker, former chair of microbiology at OSU and "acidophilus guru" with teaching him about the health benefits of live acidophilus bacteria. Chuck and his wife, Sue Jameson Kesey, '60, used their dairy and business degrees at OSU to start a milk-processing business in the old Springfield Creamery in 1960. But when they were looking for a niche in the dairy market, they, along with the dairy bookkeeper, Nancy Hamren, began experimenting with adding L. acidophilus cultures to yogurt and in 1970, "Nancy's Yogurt" was born. 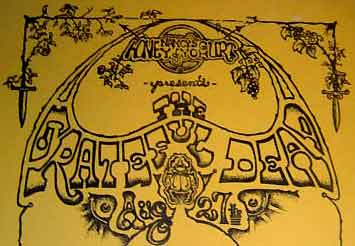 Workers in Louis Pasteur's labs first isolated the beneficial bacteria, which could be found in European yogurts, but until the Springfield Creamery began marketing its yogurt, it had not been used in America. The Keseys, who once had to ask the Grateful Dead to hold a benefit concert to keep the creeamery alive, now distribute their products throughout the U.S. and Canada.
Chuck and his brother, the late author Ken Kesey (One Flew Over the Cuckoo's Nest) of Eugene, were '"creamery kids" with their father the manager of' a Eugene creamery. Ken went to UO and Chuck headed to OSU to study dairy technology and bacteriology.

In 1972, when the creamery was having financial problems, Chuck went down to Marin County, Calif., and talked his brother's friends, the Grateful Dead, into coming up to Eugene and doing a benefit concert for the creamery. Tickets were printed on Nancy's Yogurt labels and more rhan 20.000 people attended the first "Field Trip" Grateful Dead concert. 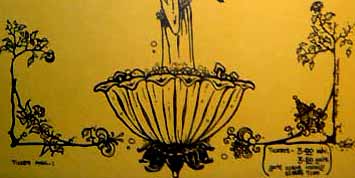 The Keseys seem proudest of the family atmosphere at the creamery. Their chlidren help run the business, and a number of the company's 50 employees are second-generation creamery kids. Sue manages the office, Chuck tastes the yogurt every day to see if it's ready, and you'll still find Nancy in the front office-- doing the books. 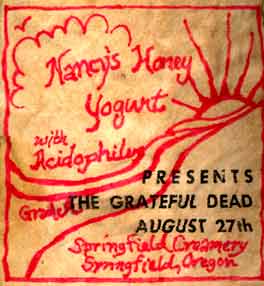 WHERE IS THE MOVIE?

The '72 Field Trip was filmed in its entirety in 16MM with the goal being a theater release but what happened? Only Sam Field, the producer, can answer that one. Here is the latest (already a year old and still no ne news) on that longawaited, eagerly sought, gem of historical significance: 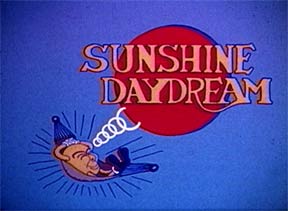 "I know the TV networks consider if they get a letter supporting a show, it
represents 100,000, or some such number, viewers. I trust you when you say
you speak for many. I know there are many who agree with you and we need to
get this movie out there for all to enjoy. It will happen!"

"As you know, GD is still going through their changes and somehow, they have
not yet found the time to bless our project for its due release. We do need
them for a minor remix and, of course, they can add immeasurable promotional
energy. When the summer tour slows down, and everybody gets back in town,
we will give them our full court press and get this pushed through."

"Since we have basically 4 camera tracks, Jerry cam, Bobby cam, Phil cam and
general cam, we thought the DVD should have all 4 picture tracks available
and you could watch "all Jerry all the time", if you so desired."

which I setup for just this purpose, with all your friends and then I can take a stack of emails with me when we finally do the negotiations. You can make a
difference."

Yeah, right, Sam, we know you will do the right thing, right, Sam? Whatever, email Sam, everyone, and demand your right to watch the movie, Sunshine Daydream! 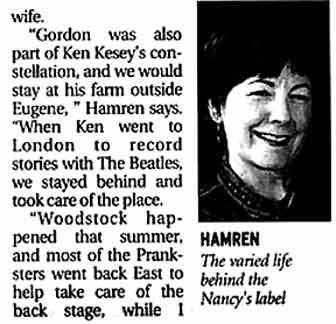 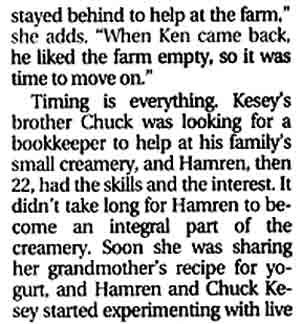 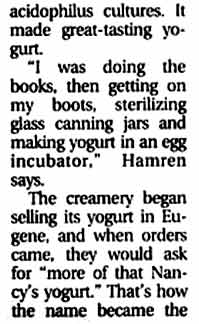 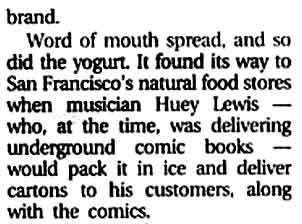