Kesey is a master wordsmith. His words pop the pompous balloons of
falsity. His words trumpet the lasting visions of truth. He slices
and dices words like a spinning kitchen appliance. He blows words
like a spontaneous jazz musician. He uses words to instruct. To
illuminate. To describe. To evoke emotions. To entertain. He uses
words like a ventriloquist; they pop out from someplace else. In his
own words he describes his favorite style of writing, "Ongoing
honesty with a little fancy skill salted in."

Everything went swimmingly. The historically significant event was superbly organized by Kathy Harrington, the head of the English Department at Springfield High School, and everything happened right on schedule and all the participants were at the top of their games. The bus arrived on time after some earlier pattity pattity heart palpitations when George Walker had to futz with the carburetor for a long while before we could leave. I ran the sound system and got it figured out so by the time we got to the high school. The Who, playing the Magic Bus, was blaring out over the loudspeakers, drawing a crowd to the curbside like mice to the Pie-Eyed Piper of Springfield's flute. 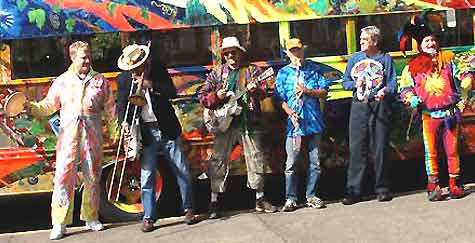 The cheerleaders made a double line at the door and we exited through the line like married couples heading for the altar. Izzy Whetstine, decked out in his tie-dye jesters outfit led the way. John Swan played his dobro, I was on trombone, George on his axaphone, Phil Dietz on hand drum, Mountain Girl on penny whistle, Mike Hagen on Sprite One Liter Bottle, Zane Kesey on train whistle, and we sang and played When The Saints Come Marching In and then the school band marched forward playing On Wisconsin, old marching band fight song, then they stood in rows and played music and the cheerleaders did dance routines. 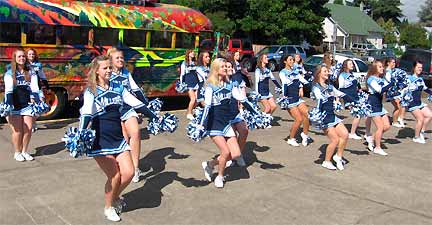 It was time to go to the stained glass window unveiling. We led the way doing When The Saints Come Marching In through the halls and up the stairs to the second floor and the landing in front of the Language Arts Wing, where the ceremony took place.

In the beginning was the word and the word it was good. Good words
have power, Kesey knew, like Shazam! One single word can change a
crippled newsboy into a superhero. Words can get you in trouble.
Words can also talk you out of trouble. Words can keep you alive. We
no longer have Kesey but we will always have his words. 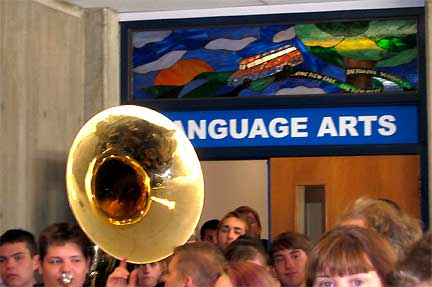 The Language Arts Wing door was to the left, and above the door the stained glass window, a large work with the bus pictured and the words scrolled, one flew east one flew west, one flew over the cuckoo's nest. 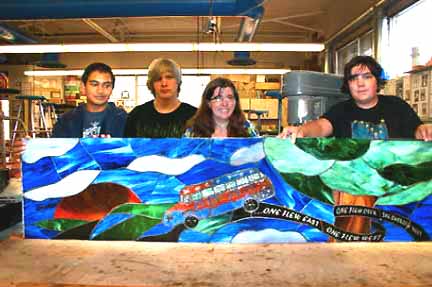 The students who designed the panel are, left to right: Shalvin Prasad, Jared Allison, Tori Gatlin, and Michael Silva, all of whom are students in Karen Perkins' Glass and Graphics class. The panel took over a year to complete.

A lectern with microphone stood in front of a railing, behind it a large atrium looking down onto the floor below. The crowd of people jammed onto the landing, filled the hallway at the rear, and stood on the steps leading in. 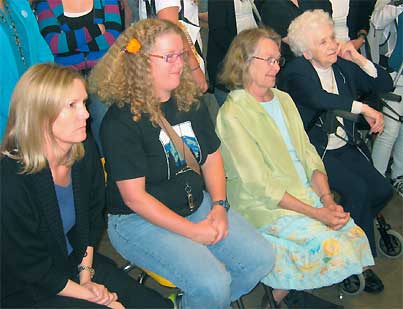 There were chairs in front for Geneva and Faye. Sunshine and Shannon sat there, too. Talks were short and sweet, even mine, much to the happiness of Faye and Geneva who groaned when I said, "They want me to say a few words and you know how that goes."

Afterwards we went back to the bus and played and sang for the second lunch hour kids. 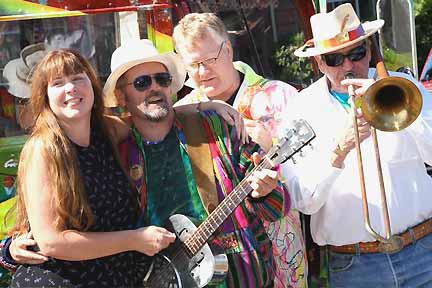 A tremendous and successful scene, congrats to Kathy Harrington (she's on the left in the pic) and to the others who helped put it on

FOR MORE PICTURES AT THE HIGH SCHOOL
MORE

Here's some links sent in by Karen Perkins

You have to endure the advertising but this is a clip[ of the beginning.
http://www.kval.com/news/59751397.html?video=YHI&t=a

Register Guard article & you have to select photos
http://www.registerguard.com/csp/cms/sites/web/news/cityregion/ 20313516-41/story.csp